DG: As a poet with Indigenous (Cherokee Nation of Oklahoma) and European roots, your work deals frequently with themes of nature, the growing isolation between humanity and the natural world, but also the intersection between the West and Native experience, specifically in your book Deer Trails, but also elsewhere. Along with a discussion of the book, can you touch a little bit upon the tensions, contradictions, and perhaps even harmonies of living in a city like San Francisco, so modern and innovative, yet, at the same time, inseparable from its past Indigenous history?

KS: As long as people think of themselves as not being in the natural world, the divisions between some people and Nature will persist. The settler/colonizer mindset can’t be aligned with Indigenous perspectives, but if people think of each other as in a community, it could do some good for everyone. I think that the way that people are cut off from one another and one another’s perspectives is a deeper wound than just Indigenous/Non-Indigenous communication. I’m Goral Polish and CNO, that’s a pretty modern identity. My children are also Hawaiian and Mongolian, that combination seems very modern to me. My Cherokee dad was a telecom engineer. Tradition isn’t a foil for innovation.  I think that the answers already exist, but that the historical and contemporary tensions need to be understood, taught and discussed.

Deer Trails was my love letter to San Francisco. My San Francisco—the city I was born in, the city my mom was born in, which may or may not always resemble the city as other people see her. My most recent collection Exile Heart is a bit more focused on Indigenous issues, but the poems from both  volumes are of similar vintage.

DG: You were elected by San Francisco Mayor Ed Lee to serve as the city’s seventh poet laureate. Can you describe some of the projects, initiatives, and campaigns you organized during this time that helped bring not only poetry but also Indigenous issues to the foreground?

KS: I was nominated for the laureateship by my poetic peers and vetted by a group of former laureates, poetry activists, publishers, and librarians. Ed Lee picked me from a short list of three. My suspicion is that he thought I was mostly harmless. In my role as SF Poet Laureate, I organized roughly five readings a month. I was part of a team, along with Thea Matthews and Denise Sullivan, who put together four poetry chapthologies that drew from readings in the Mission District of San Francisco.  I gathered poems from SF poets that will eventually become a poetic map of the city, a project that has proven more psychological than I’d anticipated.  With much help, I curated a poem a day for a year. The poems are archived on the San Francisco Public Library site. I got up to a lot of good trouble as SF Poet Laureate. I was contacted recently by a South Asian poetry and art publication who told me that I’d put over 1000 women on microphones over the last five years. That may be true—I haven’t counted that, but there have certainly been over 1000 poets. I supported poetry activities that needed support. I’ve worked with food equity people, housing equity people, health equity people, along with poets and activists who align with the politics I agree with. It may be that my most important activism in terms of the Indigenous part of my heritage has been just working with people of all backgrounds while also being Cherokee, so that the stereotypes could evaporate without too much comment. My personal politics show up in my poetry, but as laureate my responsibility was to support poetry and poets. Certainly now I know more Indigenous poets than many people do. I’ve tried to center more Indigenous Californian voices than I’ve seen done before. I try to mention and support things of local Indigenous concern like the potential destruction of the West Berkeley Shellmound and the story of Felix Cove in West Marin. Strong and important stories feed good poetry. Truth feeds good poetry.

DG: Along with the written word, you’re also a visual artists, working in the traditional Indigenous crafts of weaving and beadwork. How do these arts influence your poetry, and, conversely, how does your poetry influence your artistic activities?

KS: Some stories are told in words and some stories are told in beads or fibers. I’m not sure that there’s much difference between one and the other. I hold an MFA in fine arts /textiles from San Francisco State University. I also tat, loom weave, fold origami and do string figures. The story finds the medium.

DG: When did you decide that poetry would be more than just a hobby, but a way of life? Do you believe you learned the craft from libraries and books or from life experiences—to some extent it’s always both, but which one do you gravitate more towards?

KS: My poetry mom/hero was Carol Lee Sanchez. She organized poetry readings at the Coffee Gallery in North Beach, co-founded the Bay Area Poetry Coalition, helped to midwife California Poets in the Schools and exposed me to live readings from the time that her son and I became friends in second grade. I’m not sure that I ever knew poetry could be a hobby and not a life.

DG: One of your works I always enjoy reading is 21st-Century Meditation, where you write the following: “Memory spirits give me days full of / Words I’ve forgotten or / Never been taught the / Language in my cells that won’t come out.” Indeed, the spoken word is a major cornerstone of culture and it’s unfortunate that Indigenous languages are dying out at an alarming rate. Efforts to digitize them, such as recording oral traditions and conversations have reversed this phenomenon to some extent, but it isn’t enough. Can you think of other ways to address these issues and is there, perhaps, something that poetry can do to preserve the languages and traditions of Indigenous peoples?

KS: I’m glad that you like that poem. My niece, Dr. Jenny Davis, would probably answer this question with more grace, as she is, among other things, a linguistics professor. I can give it a whack though. All over the world we are losing diversity of all kinds: bio diversity, linguistic diversity, cultural diversity. Think of the result of monoculture planting in fields—one successful infection, insect, rogue beast of any description, can take the whole thing out. If language nourishes thought, like a food crop nourishes body, it’s probably better to have more than one available. I’m old enough to remember when schools discouraged bilingual parents speaking a second language at home. We now understand that being bilingual or even multilingual is good for cognition. Probably not punishing or beating Indigenous children for speaking their languages has been a good thing for language retention. The best way to foster language retention is to use the language. If you go to Talequah, OK, you will see the CNO does precisely that—signs in Cherokee, opportunities to use the language. It’s not about preservation, but about use, and it’s important to have the kinds of unique thought tools that each language provides. It’s important for everyone that we retain those tools. I don’t know what poetry has to add to that, unless it’s more poems in more languages. More poems … always a good idea.

One of your most powerful works is Murdered Missing, a collection of fifty poems dealing with “murdered Indigenous women in the western hemisphere,” as you write in the introduction. Poetry, as you’ve stated, can make us aware of the issue, but what else can be done to perhaps reverse this alarming trend?

Smart murderers kill people they think will not be missed. Smart kidnappers take people who have been marginalized. The people who take and kill Indigenous women understand that we are not considered of particular value. If these crimes were investigated the way that other murders and kidnappings are investigated, we might see a change.

Kim Shuck is a poet, educator and visual artist from San Francisco, CA. She holds dual citizenship from the United States and the Cherokee Nation of Oklahoma. Shuck is author of seven books of poetry the latest being Deer Trails from City Lights Publishing and the chapbook Whose Water? from Mammoth Publishing. She is San Francisco’s Poet Laureate Emerita.

Robert Pinsky was born in Long Branch, New Jersey, in 1940. He is the author of nine poetry collections, including Sadness and Happiness (1975), The Figured Wheel: New and Collected Poems 1966-1996 (1996), and At the Foundling Hospital (2016). In addition to editing five anthologies, Pinsky has published several books of prose, translations of Dante and Czesław Miłosz, and the computerized novel Mindwheel (1985). His honors include fellowships from the Guggenheim Foundation, the National Endowment for the Humanities, and Stanford University, and he has received the Lenore Marshall Poetry Prize and the Harold Morton Landon Translation Award from the Academy of American Poets, the American Academy of Arts and Letters Award, the William Carlos Williams Award and the Shelley Memorial Prize from the Poetry Society of America, and the Oscar Blumenthal Prize from Poetry magazine. From 1997-2000, Pinsky served as the U.S. Poet Laureate Consultant in Poetry to the Library of Congress; he later served as a Chancellor of the Academy of American Poets from 2004-2010. Pinsky has taught writing at Wellesley College, the University of California, Berkeley, and is currently a professor in the graduate writing program at Boston University. He lives in Cambridge, Massachusetts. 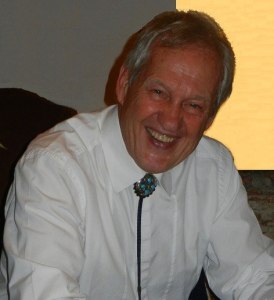 The third part of Interlitq’s Feature on Californian Poets — (Part 1) (Part 2) — has been published. Work from the following poets is featured:

Peter Robertson Featured on Apple Podcast, “The Art of the Invisible,” hosted by Zuzana Morvayová

Click here to listen to the podcast
“The Art of the Invisible,” Episode 20, with Peter Robertson

Peter Robertson was born in Glasgow in 1960, of Scottish and Irish descent, son of William John Robertson, formerly Chairman, West of Scotland Refractories, and Isobel Murray Imrie; he was the step-nephew of Ames Lyell Imrie CBE, variously City Chamberlain of Edinburgh, City Chamberlain of Dundee, and Consul of Sweden at Edinburgh. He was brought up in Perthshire, and educated at King’s College, Cambridge. He is the President, Publisher, and Founding Editor of The International Literary Quarterly (Interlitq), a not-for-profit corporation in the State of New York.

A journalist by profession, he also taught for the British Council in Madrid, and was later employed as an Editorial Assistant for the Alfaguara Publishing House in Buenos Aires. He was then contracted by the International Monetary Fund as a linguist, and for which organization he also conducted research. Subsequently, he acted as a Consultant for a number of international agencies, including the World Bank, the European Investment Bank, the Organization for Economic Cooperation and Development, and UN Women.

As an author, his fiction has been translated into several languages, and he has published translations of work by authors such as Jorge Luis Borges, Rosalía de Castro, Rubén Darío and Paul Éluard.

He lives in Argentina and Scotland.

Zuzana Morvayová studies Innovation and Organization of Culture and the Arts at the University of Bologna. Since February 2020, she has aired episodes of her Apple Podcast, “The Art of the Invisible,” which focuses on the people who work behind the scenes in various artistic fields, such as art, filmmaking, and publishing.